Learn about the diverse and talented staff who help make Diversionary what it is!

Matt M. Morrow
Executive Artistic Director
(He, Her, They)

Since joining the organization in 2014, Matt has helped to grow Diversionary Theatre’s operating budget by 100%. Under their leadership the theatre has been nominated for 29 San Diego Critics Circle Awards, winning two Outstanding New Play Awards in 2017 and 2019. Alongside Diversionary’s Board of Trustees, Matt led the Securing Our Future campaign, a $2.5 million renovation project for the theatre’s home in University Heights, slated to reopen early Fall 2021.

Matt was honored with the inaugural Larry T. Baza Arts & Culture Award from San Diego Pride, and was a Creative Catalyst Fellow with The San Diego Foundation and La Jolla Playhouse. He has developed new work with The Sundance Theatre Institute, The Old Globe, The Banff Centre, Center Theatre Group, American Conservatory Theater, Lincoln Center, PlayPenn, and Page 73 Productions in residence at the Yale School of Drama.

Jenny has over 20 years’ experience in working for non-profit theatre, including 10 years as the Associate General Manager of La Jolla Playhouse. She also served as a Producer of the  2017 WithOut Walls (WOW) Festival and of the wildly successful Accomplice: San Diego, an immersive theatre piece performed throughout San Diego’s Little Italy in 2013. Jenny also line produced many of the La Jolla Playhouse’s New York musical developmental workshops including Escape to Margaritaville, Hands on a Hardbody, Bonnie and Clyde, Little Miss Sunshine, Crybaby and many others.  Jenny serves on the National Alliance for Musical Theatre Membership Committee as well as the selection panel for NAMT’s Innovation and Exploration Fund grant.

Frankie is a San Diego-based, New York City-trained theatre artist who has been working professionally since 2012. After receiving his BFA from the Tisch School of the Arts at New York University, Frankie has worked as a performer, deviser, educator, and administrator throughout the US and abroad. He has created and spearheaded multiple theater education programs throughout Connecticut and New York and worked as the Residential Director of The Center for Creative Youth, based out of Wesleyan University.

He currently works as a teaching artist with La Jolla Playhouse, New Village Arts, and Diversionary Theatre and has extensive training in devised theater techniques, arts integration, and trauma-based theater practices. He was most recently an Artistic Associate and the Artist-In-Residence at New Village Arts in Carlsbad, CA, and currently serves as the Associate Artistic Director of Diversionary Theatre.

Skyler Sullivan is an actor/director/ and arts educator transplanted from New York. While in NYC, he worked with The New Victory Theatre for ten years as a veteran teaching artist, where he honed his skills as a curriculum developer and facilitator. Other NYC teaching credits include: The Lee Strasberg Theatre & Film Institute, the Professional Performing Arts School, and on-set coaching on two P.B.S. shows: Sesame Street and The Electric Company.

Skyler is thrilled to be working with Diversionary Theatre as it continues its tradition of arts education and outreach. Currently, in San Diego, he also teaches for The Old Globe and The La Jolla Playhouse. Skyler also works as a therapeutic clown with Healthy Humor, a nonprofit serving chronically and terminally ill kids and their families. Education: B.F.A. in acting Emerson College, M.F.A. in Acting Brooklyn College.

David is thrilled to be part of the Diversionary team. They have worked with many theatres in town mostly as an electrician or lighting designer. They got their start at Mesa College. Upon completing the program for Dramatic Arts, David came back to lead and manage the scene shop where they taught students how to build, design and run scenery. From there, David went on and expanded their knowledge of lighting through over hire work and design for small productions. They then worked for San Diego Junior Theatre as the Assistant Production Manager, acting as head electrician and lead carpenter for all of their productions. While working at Casa del Prado Theatre, David also started working with the San Diego Civic Youth Ballet as their stage manager and lighting designer.

Peggy Ryan studied theatre at UC San Diego, Arts Management at Carnegie Mellon and the University of Bologna, and International Education at Florence University of the Arts. Her passion for arts accessibility, education, and advocacy have brought her to the Theatre Communications Group and Americans for the Arts as a researcher, La Jolla Playhouse as an educator, and as a marketer and marketing consultant to Chautauqua Theater Company, Carnegie Mellon School of Drama, San Diego State University School of Theatre, Television, and Film, the San Diego Italian Film Festival, The Old Globe, San Diego Repertory Theatre, Folger Theatre, and Ojai Playwrights Conference.  Peggy is thrilled to be part of the amazing Diversionary family and to be able to use her skills in support of social justice through theatre.

A performing arts educator, and performer, Andréa is ecstatic to be working with Diversionary in a new position. The majority of her San Diego stage credits are at Diversionary (A Kind of Weather, Significant Other, Bull in a China Shop and Homos or Everyone in America). Agosto attended UMKC where she studied film and theatre. For her graduate studies, she looked towards language, literacy, and sociocultural studies. She believes the marriage of her arts and sociocultural studies has informed how she views the arts, as well as how she discusses the two which is evident in the Intersectionality and Justice panels she facilitated for Diversionary. She aims to continue exploring these issues, and advocating for BIQTPOC artists.

Originally hailing from Los Angeles, L.B. offers over 15 years of experience in theatre and event production and holds certification in Audio Recording Technology and Film/Video Production. Combined with a professional background in marketing and office management, L.B. dedicates her skills to growing small businesses, including her own video production company 8Web Productions.

Dedicated to the passion of life and the art that exists in and all around us, L.B. is in constant search of unique opportunities and new challenges. She believes that through art and entertainment we can heal the world. www.lbharo.com

Joanna, an identical twin born and raised in Virginia made San Diego her new home in 2009. Not long after settling into the vibrant town did she and her husband open Cueva Bar, a tapas style restaurant in University Heights. Weathering the storm of COVID-19, Cueva Bar was rebranded as De Nada Kitchen and Market in 2020.

While Joanna has enjoyed operating her own business she was excited to bring the knowledge and wisdom she has garnered over the years to Diversionary Theatre. She has been received with open arms and looks forward to growing with the theatre.

Derrol grew up in Maine and at the age of eighteen decided to defer from college for a year and try his luck in the theatre world out in California. He had done many a church play and was involved with Kids on the Block, a puppet troop teaching kids about disabilities as well as a few years in improv.

After moving here and getting settled he got his first gig at 6th @ Penn Theatre, in Torch Song Trilogy right at the one-year goal he gave himself. From there, in 1999 he went on to do some work with Diversionary theatre…and it stuck. Derrol has been a proud member of Diversionary Theatre since that day. Starting with a small writing group, then onto the stage, in a play called Handsome Men. From there he was House Manager, Stage Manager, Dresser, ran the lights and sound, and stepped into a few roles as an understudy and now, in his current position behind the Bar!

When not at the theatre he hangs out on his little urban farm with his critters and pursues his artistic side by participating in photography shoots, is a character in the graphic novel series, PURE, and creates art in several different forms.

Cambria is a Xicanx director based in San Diego, California completing an MFA in Directing at UCSD’s Department of Theatre and Dance. All of their work rises from their core inspiration: queer and female artists of color from the past and present. In Portland, Oregon they co-founded and facilitated The AGE Theatre Collective and mentorship program to empower the resiliency of female and non-binary theatre artists of color. Recent credits include: Teen-Versionary at Diversionary Theatre (Assistant Director) Fandango for Butterflies (And Coyotes) at La Jolla Playhouse (Associate Director) Fifty Boxes of Earth at UCSD (Director), In The Red and Brown Water at UCSD (Director), Intergenerational Audio Project at Oregon Children's Theatre (Director), a queer adaptation of Twelfth Night by William Shakespeare at UCSD (Director), World Premiere Adaptation of King Arthur at Long Beach Opera (Assistant Director).

Jesse Marchese is a theater administrator, writer, scholar, director, and dramaturg whose research and production work exists at the intersection of queer theory and performance studies. He is currently a PhD student in the Department of Theatre & Dance at UC San Diego. Previously, Jesse served as Executive Director of Astoria Performing Arts Center (APAC) in Queens, where he produced acclaimed productions of Follies and Caroline, or Change, and premiere productions of Madhuri Shekar’s Queen and Monet Hurst-Mendoza’s Veil’d. Prior to APAC, Jesse served as Associate Director of Off-Broadway’s award-winning Mint Theater Company where he helped to produce nearly fifteen productions, two of which he also directed: The Lucky One by A.A. Milne and The Fatal Weakness by George Kelly (nominated for two 2015 Drama Desk Awards). His work has also been seen at The Civilians, The New York Public Library for the Performing Arts, New York City Children’s Theater, Lincoln Center for the Performing Arts, York Theatre Company, New World Stages, Theater for the New City, Gallery Players, Village Light Opera Group, and Marymount Manhattan College. He received his BA in Theatre Arts at Marymount Manhattan College and his MA in Theatre at CUNY Hunter College.

Mx. Adkins is a queer trans nonbinary theatre artist and poet. They are a renaissance employee; house manager, associate electrician, handy crew member and carpenter, host and producer of Queer Poetry Night, occasional office assistant, and budding assistant director. Their many passions and interests culminate in a wide variety of skills that are employed in all areas of their life. They studied theatre arts, with a concentration in directing, at Grossmont College and UC Santa Barbara, earning degrees from both institutions. Ezra grew up in San Diego, and has a penchant for drastically changing their hair color every six months. They savor the opportunity to create and grow in a queer friendly environment.

Want to Join the Diversionary Team?

View our Job Openings page for all currently available positions. 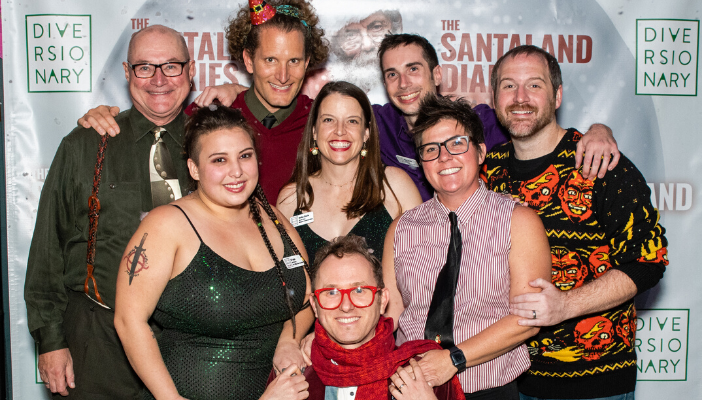