LIVE FROM THE LIZARD LOUNGE 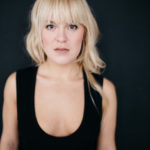