A love letter to musical theatre and to the joy of collaboration, [title of show] is a witty new musical about two struggling writers writing a witty new musical. A can’t miss for those who love Broadway! The New York Times called [title of show] “delectable entertainment!  A postmodern homage to the grand tradition of backstage musicals like Babes in Arms, Kiss Me, Kate and A Chorus Line” and a “zesty, sweet and charming new musical.” 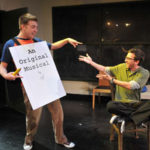 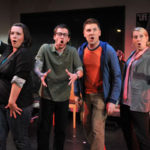 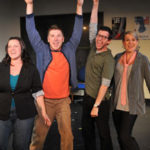 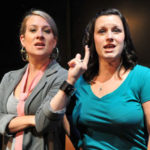 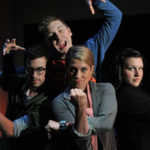 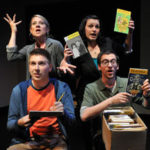 To kick-off their 25th Anniversary Year, Diversionary Theatre will stage the musical [title of show]as the first show of its 2010-2011 season.  [title of show] has music and lyrics by Jeff Bowen and the book is by Hunter Bell.  Diversionary’s production will be helmed by James Vasquez, with musical direction by Tim McKnight.  The cast of four features Tony Houck, Heather Paton, Karson St. John and Tom Zohar.  [title of show]is an official event of San Diego LGBT Pride.

[title of show] is the story of two struggling young writers writing a new musical about two struggling young writers writing a new musical!  Jeff Bowen (Music & Lyrics) and Hunter Bell (Book) decide to submit something for the 2004 New York Musical Theatre Festival just three weeks before the deadline. They began chronicling their own process and crafted an original story that just happens to be (with some artistic license taken) autobiographical, so they cast themselves in the roles along with their two friends, Susan and Heidi.   The evolution of [title of show], from its smash debut at the New York Musical Theatre Festival in the fall of 2004, to its successful Off-Broadway run at the Vineyard Theatre in February 2006, to its debut on Broadway in July, 2008, is chronicled in this “zesty, sweet and charming new musical.” (The New York Times).

[title of show]  previews Thursday and Friday, July 8 and 9, opens on Saturday, July 10 and runs through Sunday, August 8.  Food for the opening night party will be provided by Parkhouse Eatery.  Performance times are: Thursday at 7:30pm, Friday at 8:00pm, Saturday at 3:00 and 8:00pm, Sunday at 2:00pm, with a pay-what-you-can performance on Monday, July 26 at 7:30pm.  Single tickets are $33-$35 with discounts available for students, seniors (60+), military and groups (10 or more).  Season subscriptions are also available for the six-show mainstage season.  For information, call the box office at 619.220.0097 or log on to www.diversionary.org.

See what’s happening with [title of show]across the country (indeed, the world)! http://www.titleofshow.com/

“C’mon, gang, let’s do a show about making a show!” Now usually that kind of talk’s a recipe for, if not disaster, then at least boredom. Not so Jeff Bowen (music and lyrics) and Hunter Bell’s (book) 90-minute charmer about the creative process and its discontents. They have three weeks to produce a musical. They do, and it exceeds their dreams (as did the original, which went to Broadway). They find humor in unpromising subjects (an “awkward photo shoot”; filling out an entry form). They sing catchy, seemingly improvised songs. And in ways more sophisticated than their humble four-chairs-and-a-piano staging suggests, they become Pirandellian: young, gay performers in search of a musical. Director James Vasquez has an obvious love for the material. As do pianist-musical director Tim McKnight and deft lighting designer Karen Filijan. And the cast shines: Heather Paton; Craig Noel Award-winners Tony Houck and Karson St. John; and local favorite Tom Zohar, in what may be his final performance in San Diego for some time, since New York beckons.

Absolutely FABULOUS! The entire audience was enthralled by this must-see production for anyone who loves modern musical theatre. The extremely talented cast gave warm performances of the principals, with just enough character to make them recognizable but not imitations of the originals. This is a triumphant West Coast premiere… Hunter Bell and his friends can be very proud of the way their brainchild is being presented here in San Diego! GO…and have a delightful evening of theatre, one you will remember!

From the first emphatic capital letter to the final flourish of punctuation, Diversionary Theatre’s “[title of show]” — a musical about its own creation — is destined to get a rave review that begins with the paragraph you’re now reading.

“[title of show]” — and that is the title of the show now getting its West Coast premiere at Diversionary — is a show about itself, and yet also a show that’s about pretty much every musical ever written.

It begins with a song called “Untitled Opening Number,” gleefully cataloging all the musical-theater clichés it’s trotting out (“We’ll get a little louder to further emphasize the point / And then we’ll cross downstage toward you …”).

It goes on to document its own real-life evolution from jokey, thrown-out idea to actual production to an eventual date with Broadway, winking all the while to the show’s deliriously high concept. In a scene where the new piece is about to be entered in a theater festival, one character sensibly asks: “If the finished script is in the envelope, should we still be talking?”

In a way — if an ill-advisedly metaphorical way — “[title of show]” is like a snake that swallows its own tail. Or maybe more like a snake (a different snake this time, because that first one is gone, having swallowed itself) that loves musical theater and is full of witty songs and follow-your-bliss uplift. Which seems a lot to ask of a snake, but still.

Of course, trying to mimic in print the ingenious way “[title of show]” documents its own birth, evolution and self-prophesied Broadway glory is a gambit doomed to failure, and kind of [synonym for “lame”]besides.

But it’s hard not to fall deeply into the playful spirit of Jeff Bowen and Hunter Bell’s matchless musical after seeing Diversionary’s production, staged by James Vasquez (making a case as the best young director in San Diego) with near-perfect pitch for the show’s mix of whimsy, inspiration and full-on, inside-the-biz geekery.

A little confession: I think it’s presumptuous for a critic to call a show a “must-see,” as if those who have other priorities to deal with (paying bills, raising kids, reading this) deserve to have a big scoop of guilt plopped onto their already too-full plates.

And yet here it is: If you see only one musical this year, go see “Cats” somewhere, so that I can have your seat for “[title of show].”

The story behind the title (and behind the story): In 2004, composer-lyricist Bowen and book writer Bell decided — three weeks before the submission deadline — to enter the New York Musical Theatre Festival. Lacking an actual idea, they chose the show itself as the subject, adopting the entry-form prompt “[title of show]” as the name and their own names as the characters’.

The two played themselves, alongside Heidi Blickenstaff (as Heidi, who has a song called “I Am Playing Me”) and Susan Blackwell (Susan). As its success took the musical from fest favorite to off-Broadway to, in 2008, a Broadway run, “[title of show]” went through updates and growing pains (“Change It, Don’t Change It,” “Awkward Photo Shoot”).

Now, as it goes out into the world, having new actors play these real-life people in this show about itself might seem the straw that snaps the camel’s back, something the camel actually won’t mind because its head has just exploded.

But Diversionary’s cast slips right into the skin of these characters, starting with Tony Houck, who brings big fun as the boisterous Hunter. Houck is all over the character’s wry, drama-queen wisecracks, and has a knowing way of toeing the show’s deceptively tricky line between total goof and smart, affecting tale.

Tom Zohar’s casting as the more reserved, uptight Jeff seems a bit of an inside gag all its own, since Zohar is known for his more frenetic, kinetic turns on local stages. But he really gets Jeff’s dry humor and almost religious devotion (something Hunter shares) to pop culture and musical-theater lore — the show is littered with inside references that make it a fun parlor game for show fanatics.

Karson St. John, an 8.0 stage-quake who’s been knocking local theatergoers off their feet since Diversionary’s “The Little Dog Laughed” last year, is so right as the deadpan, downtown-cool Susan, who has a day job as “corporate whore” but morphs into vampire-slayer at night. (“Die, Vampire, Die!” is the show’s gloriously profane ode to following your own creative jones, and — if not stabbing naysayers in the heart — at least kicking them in the shins.)

And Heather Paton unleashes some fierce vocals as Heidi, the budding Broadway baby (the real Heidi wound up starring as Ursula in “The Little Mermaid”) who’s conflicted between her passion for “[title]” and her career. She has the show’s most unironic moment on the pretty ballad “A Way Back to Then,” and also has a duet to die for with St. John on “Secondary Characters,” in which Heidi and Susan briefly hijack the show.

The musical accompaniment consists of a single keyboard, played by Larry (musical director Tim McKnight), the put-upon pianist who considers it a huge privilege to get a single line. (Besides playing with aplomb, the impassive McKnight makes for an ace straight man.) On paper, the show’s self-referential contortions can sound too cute for words. But when the cast breaks into the absurdly infectious “Nine People’s Favorite Thing,” a song about refusing to compromise to please the masses, “[title of show]” makes it easy to believe.