An evening with author and illustrator Brian Selznick

On Tuesday, April 30 at 7:00 p.m., Warwick’s and Diversionary Theatre will host Brian Selznick to discuss his illustrations in the newly released book by Walt Whitman, “Live Oak, with Moss.” Selznick is the New York Times bestselling author and illustrator of “The Invention of Hugo Cabret” and “Wonderstruck.”

Tickets are available for purchase through Warwick’s book store. The $37.31 ticket price includes general admission to the event and a signed copy of Live Oak, With Moss. Seating is first come, first served.

Please call the Warwick’s Book Department at (858) 454-0347 for information or visit www.warwicks.com 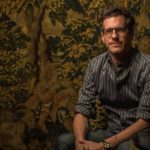 Brian Selznick is the New York Times bestselling author and illustrator of The Invention of Hugo Cabret and Wonderstruck, among many other beloved books for children. He lives in Brooklyn and San Diego.

As he was turning forty, Walt Whitman wrote twelve poems in a small handmade book he entitled Live Oak, with Moss. The poems were intensely private reflections on his attraction and affection for other men, and Whitman’s most adventurous explorations of the theme of same-sex love. This revolutionary, extraordinarily beautiful, and passionate cluster of poems was never published by Whitman during his lifetime and has remained unknown to the general public—until now.

New York Times bestselling and Caldecott Award–winning illustrator Brian Selznick has been greatly influenced by Whitman and has created more than 100 pages of original images that form a stirring visual narrative around the poems. Live Oak, with Moss is a transporting tour de force that presents Whitman like never before and will be beloved by Selznick’s grown-up fans as well as poetry lovers everywhere. An afterword by Professor Karen Karbiener illuminates the story of Whitman’s enigmatic cluster of poems, provides keys for interpreting their meanings, and highlights their contemporary significance. Published just in time for Whitman’s 200th birthday in 2019, the reassembled, reinterpreted Live Oak, with Moss serves as a source of inspiration and a cause for celebration.