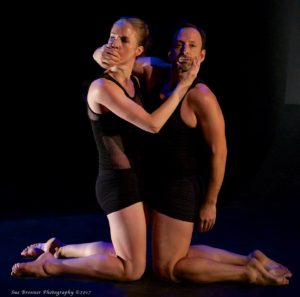 It is billed as “A Contemporary Burlesque.”  What does that mean?  It means that this is not traditional fare.  Burlare translates into “to make fun of.”  There is levity in this performance, but it is subtle and ironic.  Now that things are starting to clear up, let’s talk about what this show isn’t.  It isn’t just an erotic dance show, it’s an intelligent dance show with strong erotic elements.
Imagine, if you will, sensual ambient music.  There is a pole on the left part of the stage.  The majority of the space, however, is devoted to dance.  Way Down We Go (Premiere) consists of three dancers–Steven Beasley, Victoria LeBrun, and Cara Steen.  They take pole dancing to a new level.  The moves are precise and very disciplined.  The music continues to be soft and sensual.  Cara Steen choreographed.  Victoria LeBrun commented about her art form, “Pole dancing isn’t only in the context of strip clubs.”  Steven Beasley adds another dimension to the topic of pole dancing, “Why can’t men also participate (and if they do, is it not sensual)?”
Is there stripping involved in the program?  Well, yes…  But Michael Mizerany, who created and directed this excellent show, reminds us that it isn’t about stripping.  The stripping is incidental.  In the forefront, is dance and choreography—but also the exploration of abstract concepts such as Sudden Subjugation (2016).  Using music such as Landscape with Figure (1922), by Max Richter and Phillip Sheppa, choreographer Caryn Ipapo-Glass shows us a study of forces operating within relationships.  It could be people, but also nations and cultures.  The performers are Nicholas Strasburg and Brittany Taylor. 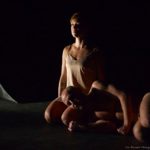 Tethered (2010) continues the theme of relationships—the way we relate to one another.  In this choreographed piece by Michael Mizerany, the musical talents of Henry Purcell and Klaus Nomi are combined to provide the backdrop for two dancers—Blythe Barton and Bradley Lundberg.  There is almost no point in talking about the technical expertise of all the participants (as that is a given), but a few things are worthy of mention.  The play of shadow and light here is compelling.  It accentuates the question:  What is she whispering into his ear?
Michael Mizerany is, first and foremost, a dancer—and a well-known choreographer.  Formerly, he danced with Malashock Dance.  He now is the guiding force behind Compulsion Dance & Theater.  Besides the present series, he has choreographed various productions such as Altar Boyz, Scrooge in Rouge, Spring Awakening (among others).   He is the recipient of various awards around town.
And then, Teeth (Premiere) comes in as that fun and energetic number… 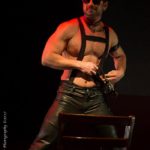 Travis Ti performs to the music of Lady Gaga.  Remember the stripping?  Insert here.  This is an absolutely riveting performance.  The visual image of a piece of leather clothing hanging from a stage light is one that will stay with the audience for a long time to come.  All the Rave (Premiere) is when most of the dancers come together in a performance to the excellent and uplifting music of The Chainsmokers.  With a nod to all the ravers out there—a new dance style is here to stay.

Cage Match (2015) is by far the most interesting piece in terms of dance theory because fighting in our culture is choreographed.  As Michael Mizerany puts it, “Naked aggression is the only way we can accept the aesthetic elements of a form of dance—as it pertains to men…” Bradley Lundberg and Nicholas Strasburg wrestle/dance to the sound of Woodkid’s music.  Ultimately, is it about love and connection? 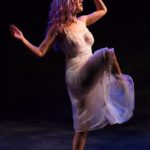 In a totally different vein (as in childhood remembered…), Sarah Larson performs in Remember (Premiere) accompanied by music from Daughter.  In a piece choreographed by Zaquia Mahler Salinas, memories from the past move the dancer along.  Playful, coy, and innocent—this solo performance is unlike the others in terms of concept (yet relevant as a dance number by providing a contrast).

If the dance program was to be seen as a menu, we are now approaching the dessert.  Are you Ready? (Premiere) is the offering choreographed by Andrew Holmes (and he entertains with humor between dance numbers throughout).  With raw energy, a medley is formed by combining music from dumblonde (love blind), K.Flay (Blood in the Cut), and Demi Lovato (Confident), an ending worth repeating.  Andrew Holmes and Nicholas Strasburg dance us toward the finish line.  A woman in the audience approvingly hummed the last tune and said, “ What is wrong with being confident anyway?”  Indeed…
A production such as this one doesn’t happen without an able production team.  Stage Manager, Cortney Cloud, does an excellent job.  None of the exquisite shadow-work could have been done without the Lighting Design expertise of Curtis Mueller.  Dance performances are impossible without proper Sound Design—Blair Nelson was responsible for that.  Last but not least, Title Card Design by Shaun Tuazon-Martin gave us signposts along the way.
The first part of this series was performed in 2016.  The second part is this year.  The third part is set for a 2018 opening.  Meanwhile, Michael Mizerany’s Altar Boyz plays at Coronado Playhouse from the 20th of January thru the 19thof February.  If you want to witness the next part of Diversionary’s  2017 season, Lisa Kron’s 2.5 Minute Ride and Well play in repertory mode from the 9th of February thru the 19th of March.
Mukul Khurana has written theater and film reviews for sandiegofreepress.org, Reader, and sandiego.com for over a decade.  He can be found at film and theater festivals as well.  He can be reached at mukulkhurana707@yahoo.com
Share:
Press Release: FOR THE FIRST TIME EVER: LISA KRON IN REPERTORY previous post
The Parent Plays are Coming! next post