Amazons and Their Men Playwright Jordan Harrison based his play on the life of the complex German filmmaker, Leni Riefenstahl. Our Artistic Associate, Anthony Methvin, has culled together some quotes and historical information to help add context to your experience watching the play.

“I am one of the millions who thought Hitler had all the answers. We only saw the good things; we did not know about the bad things to come. What have I ever done? I never intended harm to anyone. I do not know what I should apologise for. I cannot apologise, for example, for having made the film Triumph of the Will – it won the top prize. All my films won prizes.”

“(Triumph of the Will) was a totally unique and incomparable glorification of the power and beauty of our movement.”

“Really, if I start a work I forget food. I forget that I am a woman. I forget my dress, I only see my work. I forget because I am fascinated by my work.”

“Death does not frighten me. I’ve known so many peaks and troughs – enough for three lifetimes.” 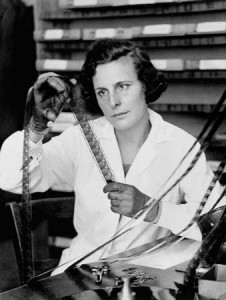 Born in Berlin on August 22, 1902, Riefenstahl began her long and extraordinary career as an interpretive dancer. After a knee injury temporarily halted her vocation, Riefenstahl became fascinated with the possibilities of the medium of film, especially nature films. She became the star of a number of German director Arnold Fanck’s silent motion pictures, typically set in the Alps (so-called Bergfilme), in which the young Riefenstahl figured as the athletic and daring female lead.

Popular as an actress with German audiences in the silent era, Riefenstahl directed her first major feature film, Das blaue Licht (The Blue Light), in 1932. The film was well received, and more importantly attracted the attention of a rising politician who prided himself on having artistic ambitions, Adolf Hitler. In the same year, Riefenstahl had heard Hitler speak at a public rally and was riveted by his oratorical style and his ability to mesmerize audiences. 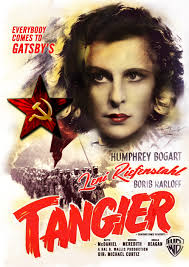 Hitler saw Leni Riefenstahl as a director who could use aesthetics to produce an image of a strong Germany imbued with Wagnerian motifs of power and beauty. In 1933, he asked Riefenstahl to direct a short film, Der Sieg des Glaubens (The Victory of Faith), shot at that year’s Nuremberg Nazi Party Rally. The film was a template for her more famous work, Triumph des Willens (Triumph of the Will), shot at the Nuremberg Rally the following year, in 1934. Riefenstahl initially rebuffed Hitler’s commission for the film, but relented when she received unlimited resources and full artistic license for the picture. Triumph of the Will, with its evocative images and innovative film technique, ranked as an epic work of documentary filmmaking, and is widely regarded as one of the most masterful propaganda films ever produced. It won several awa

rds, but forever linked the film’s subject, National Socialism, with its artist, Riefenstahl.

Equally stunning were Riefenstahl’s directorial efforts in Olympia, which captured with haunting effectiveness the images of the 1936 Summer Olympic Games in Berlin. It was for Olympia that Riefenstahl pioneered numerous cinematographic techniques, such as filming footage with cameras mounted on rails (commonly known today as tracking shots). Olympia’s forceful blend of aesthetics, sports, and propaganda again won Riefenstahl accolades and awards, including Best Foreign Film honors at the Venice Film Festival and a special award from the International Olympic Committee (IOC) for depicting the joy of sport.

As late as 1938, Riefenstahl believed that after years of hard work on her films about the Olympic games, She would be able to create a great part for herself as a movie actress in Penthesilea, the last Queen of the Amazons. Her films had been so successful that she was able to go about producing this gigantic film herself. Marshal Balbo the Italian governor of Libya provided her with 1,000 white Arabian stallions. The battle scenes would have been shot in the Libyan Desert and in the sand dunes on the island of Sylt. In the spring of 1939, she had a large number of young sportswomen be trained as Amazons and she herself learned to ride a horse without a saddle. She did not want to film the battle of the genders as a filmed theatre play, but rather intended to marry poetic language with stylized visuals. As the director, she prepared the shoots, engaged the actors and staff, selected Lipizzaner and Great Danes for the film. However, the beginning of the war on September 1st, 1939 destroyed this unique film project.

By her own account, the advent of World War II and the rapid escalation of violence under the Nazi regime had an unfavorable effect on both Riefenstahl and her career.

Early in the Polish campaign, an incident seemed to have shaken Riefenstahl’s confidence in the movement she had glorified in cinematic images. While accompanying German troops near Konskie, the filmmaker witnessed the execution of Polish civilians shot in retaliation for a partisan attack on German troops. Riefenstahl apparently left her filming that day in order to make a personal appeal to Hitler against such arbitrary violence. The incident may have planted a seed of doubt in Riefenstahl’s mind, but it did not prevent her from filming Hitler’s triumphal parade into Warsaw just weeks later.

In what she and others would later claim was an effort to eschew further propaganda efforts, Riefenstahl had begun filming Tiefland (Lowlands) in 1940. A story set in the Spanish Pyrenees, Tiefland was a project that she had earlier shelved when persuaded by a determined Hitler to undertake Triumph of the Will. Shot on location near Kitzbühl, Austria, the filming dragged out over nearly four years. In order to enhance the story’s “gypsy” flavor, Riefenstahl aides arranged to “borrow” some 51 young Roma prisoners from the nearby labor camp at Maxglan-Leopoldskron as extras. For the indoor scenes, filmed in Berlin-Babelsberg in 1942, Riefenstahl used as extras at least 66 Roma and Sinti inmates, virtually all males, from the Berlin-Marzahn camp for Gypsies. Allegations that the German Criminal Police returned the Roma, after fulfilling their “obligation,” to the Maxglan and Marzahn Gypsy camps (Zigeunerlager) and later deported them to their deaths at Auschwitz, were serious enough to involve Riefenstahl in a civil suit. That suit was dropped in 2002 only after her production company retracted a public statement Riefenstahl had made in which she claimed that all of the extras had survived the war. Tiefland premiered in 1954, eight years after French authorities occupying the Tyrol arrested Riefenstahl and confiscated her film materials, in January 1946.

In the postwar years, Riefenstahl attempted to separate herself from the criminal nature of the Nazi regime, suggesting her duty was to her craft and not necessarily to the Nazi authorities who commissioned her films. She was the subject of four denazification proceedings, which finally declared her a Nazi sympathizer (Mitläufer). Although never a member of the Nazi Party, Riefenstahl found it difficult to overcome her association with the propaganda films she had made during the early Nazi period, and encountered difficulties in regaining her position in the German cinematic community.

She gained some fame after the war as a photographer, winning many awards and honors for her photos of the Nuba people of Sudan. At the age of 71, Leni Riefenstahl fulfilled her dream to attend a diving course to be able to also work as an underwater photographer in the future. Soon she became a master. Her two illustrated books, The Coral Gardens and The Wonders Under Water, brought her back into the limelight.

In 1987, Leni Riefenstahl published her memoirs, which were released in 13 countries and reached a high circulation mainly in Japan and in the USA. In 1992, the documentary film The Wonderful, Horrible Life of Leni Riefenstahl was produced in which she herself could express her opinions about her life and artistic work. This film got several international awards, including an Emmy.

Exhibitions of her photographs were successfully organized around the world. She worked untiringly in her later years on finishing her first underwater film, visiting the most wonderful diving areas. Even at the age of 94, she dived in Costa Rica and took pictures of sharks.

Even more unusual was her decision at the age of 97 to travel to Sudan, which was isolated for many years because of civil wars, in order to research the fate of the Nuba people. Together with a small film team provided by the Odeon-Film Company, she travelled to Khartoum in February 2000 accompanied by Horst Kettner, her assistant of many years. After a long period of waiting and negotiation, the team was able to travel to the Nuba mountains under the protection of a military convoy.

Thousands of Nuba people were waiting for Riefenstahl, who learned upon her arrival that her best friends had become victims of the civil war. She was deeply shattered and wanted to search out her friends who were still alive, but this did not happen. Because of the breaking out of new fights, she was forced to leave the Nuba mountains immediately by helicopter. Disaster soon followed when, after a stopover in El Obeid, the helicopter crashed. Miraculously, there had been injuries but no deaths. Riefenstahl had to be taken by a rescue plane to a German hospital where they found that she had suffered a number of rib fractures that had damaged her lungs.

In 2002, she became the only person over 100 to release a film – “Underwater Impressions” which was a selection of footage from film clips made by Riefenstahl from the previous thirty years.She died of cancer in Pocking, Germany, on September 8, 2003, a few weeks after her 101st birthday.” 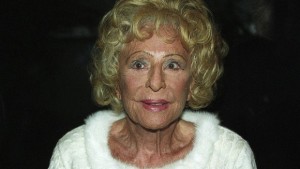