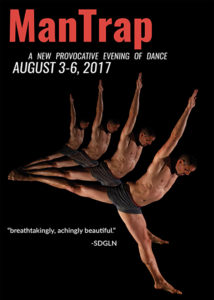 One of San Diego’s most accomplished choreographers Michael Mizerany (known to Diversionary audiences for his work on Hot Guys Dancing and In The Va Va Voom Room) presents an electrifying night of dance with his company Compulsion Dance & Theatre. Michael completes his Man Dance Series with the premiere of ManTrap. This new work joins the pieces critically acclaimed works Manhandled, Via Dolorosa, UnCoupling, and Man Clan for an unforgettable and sensuous evening of dance.

ManTrap, a comic and at times outrageous romp, is a stunning mix of contemporary dance and hip hop. When a couple meets for the first time, desires ignite, sparks fly and one big secret is revealed. And in the end, the question is: Will he or won’t he? 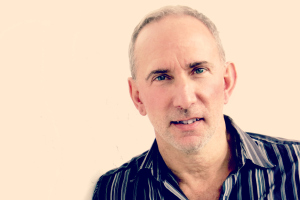 Michael Mizerany is the artistic director for Compulsion Dance & Theater. At Diversionary: Hot Guys Dancing, Altar Boyz, (Noah Longton Productions), Dooley, Divine Sister, Miss Kitty’s Wild West Revue, Scrooge In Rouge, Thrill Me, bare: A Pop Opera, A New Brain and In The Va Va Voom Room. He moved to San Diego to join Malashock Dance and served as its Associate Artistic Director until 2013. Michael conceived and directed Malashock/RAW from 2010-2013. He has choreographed extensively, including, Chicago: A Speakeasy Cabaret, Grey Gardens, Ass, or A Midsummer Night’s Fever and Jesus Hates Me (Ion Theatre), Carnival! and Suds (The Coronado Playhouse), Spring Awakening, When The Rain Stops Falling and Stupid Fucking Bird (Cygnet Theatre), The Full Monty (New Village Arts), Trolley Dances (SDDT), Rent(Southwestern College), West Side Story and Once On This Island (J*Company) and Threepenny Opera (UCSD). Michael has been the recipient of numerous awards and honors including the LA Stage Scene Award for Outstanding Choreography for Altar Boyz, bare: A Pop Opera and A New Brain, The Blue Ribbon Choreography Award for Suds, and the Bravo San Diego Award for Outstanding Choreographer of 2012 and recently received a 2015 nomination for his contemporary workMan Clan. He was nominated for a Craig Noel Theater Award for Outstanding Choreography for Dooley (2011), Altar Boyz(2012), and Spring Awakening and bare: A Pop Opera (2014). Most recently, he was nominated for a National Youth Arts Award for Outstanding Achievement in Choreography for West Side Story. As a writer, he has penned the script for In The Va Va Voom Room as well as the playlet Peter and Bart, part of the production of Bedroom & Boyfriends (2016 San Diego Fringe Award for Outstanding Writing).

Via Dolorosa is a visually stunning solo set to the haunting choral work, O Magnum Mysterium, by Morten Lauridsen.

Man Clan is a satirical and sometimes overtly provocative look at issues that are decidedly male and features four of San Diego’s most prominent male dancers.

[manhandled] is a haunting duet about a relationship in turmoil and the lengths one partner will go to save it.