“This isn’t a clumsy parody, but a sensitive, imaginative tale that really is about a boy’s realization that he is different. Mr. Solomon portrays an amazing range of characters, all of them beautifully.”- New York Times 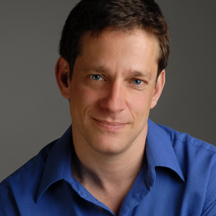 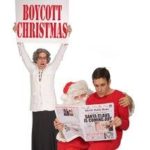 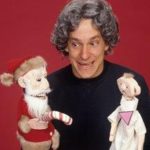 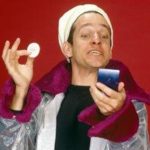 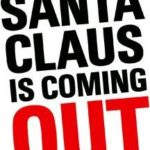 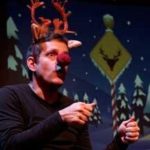 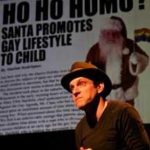 Diversionary Theatre presents this special holiday engagement as the third show of its 2010-2011 subscription season.  The play runs December 4-21 for 19 performances.  Solomon transforms into a cast of dozens to tell the “true story of Santa-gate,” including little gay Gary, his confused mom and angry dad, Stonewall veteran and former Santa “girlfriend” Jose, Mary Ellen Banfield (who evokes a 21st Century Anita Bryant), a homophobic chief elf, an empathetic Rudolph, Santa’s fake-actress wife and Santa’s Agent Sidney Green, (who affectionately refers to himself as the “Little Jew Who Saved Christmas”).

The story lays bare the intensely personal struggle of Santa Claus as he tries to reconcile his love with strapping Italian toymaker Giovanni Geppetto – a descendant of the creator of Pinocchio – with his passion for giving to the world’s children.  But word of Santa’s secret leaks out and the “forces of decency” rally against what they perceive to be the ultimate plot to indoctrinate children into the homosexual lifestyle!  “Charming and hilarious, thought-provoking and genuinely moving.” – TheatreMania.com.  “This isn’t a clumsy parody, but a sensitive, imaginative tale that really is about a boy’s realization that he is different.  Mr. Solomon portrays an amazing range of characters, all of them beautifully.” – New York Times.

Solomon says the show was inspired by the latest salvo in America’s Culture Wars:  the debate on providing gay role models to children, and the “parents’ rights” movement to keep gay issues out of the classroom.  Despite the almost universal acclaim for last year’s Off Broadway run at the Kirk Theatre (directed by Joe Brancato), the play ignited a firestorm of controversy.  In an ironic case of life echoing art, Focus on the Family’s education analyst Candi Cushman condemned the play for sexualizing Santa Claus and called writer/performer Solomon a “homosexual activist that has no qualms about using shock tactics to expose children to homosexuality.”  Her protest was joined by a chorus of right wing pundits, including Michelle Malkin, Todd Starnes of Fox Radio, Rod Dreher of beliefnet.com and even Bill O’Reilly.

Solomon responded publicly to these protests in the Village Voice and Truth Wins Out, asking adults “why is it still taboo to be open and honest with children about the existence of gay people?  Heterosexual love is promoted to children in various way – sailors can settle down with fish, princesses can get physical with frogs, and beauties can live happily ever after with the beasts who abduct them – but the child who may grow up to be gay has no reflection of himself.  There is no happily-ever-after in sight during his or her formative years.  What they can expect is taunting from other children at school and fear-mongering by adults.

“I was one of those children, and I can tell you that the fact that the subject was unmentionable and invisible when I was a child caused me a lot of unnecessary pain and shame.  It is this invisibility that is explored in Santa Claus is Coming Out.”

Jeffrey Solomon’s other solo play Mother/SON has been seen at HERE Art Center (NY), Celebration Theatre (L.A.) and on London’s Off West End at the New End and Oval House Theatres.  His performance in that play won the Best Actor Award in Dublin’s Absolut Gay Theatre Festival as well as the Awards for Audience Favorite, Best Playwriting and Best Male Solo Performer at the Columbus National Gay and Lesbian Theatre Festival. Santa Claus is Coming Out won the Best of the Fest at the same festival.  Santa had its premiere at the Bailiwick Pride Series in Chicago.  As a writer, Solomon wrote the pilot for Jim Henson’s CityKids, which received an Emmy nomination for Best Children’s Special and an Ollie Award for Excellence in Children’s Programming.  He was staff writer for Carsey-Werner/ABC TV, Tri-Star/Fox, and Nickelodeon.  Jeff is the co-Artistic Director of Houses on the Moon Theater Co., which premiered his DE NOVO at 59e59 Street Theaters in New York.  For more information about Solomon’s work, visit www.jeffsolo.com.

He’s been “in” since the Middle Ages, and in love with Giovanni Geppeto. And in Jeffrey Solomon’s very funny solo “mockumentary,” his coming out leads to “Santagate.” Among many others, Solomon interviews Rudolph, the reindeer marginalized by a red nose; the foreman of the Elf union; the icy, sanctimonious Mary Ellen Banfield; and Sidney Green, Santa’s agent who claims he’s “the little Jew who saved Christmas.” Solomon flips from one detailed character to another and moves his intermissionless story at a brisk pace, all the while poking serious fun at one of the world’s least questioned authority figures – who always knows who’s been naughty, and who, nice. Worth a try.

An intelligently imaginative turn, Jeffrey Solomon’s one-man play Santa Claus Is Coming Out @ the Diversionary in San Diego may cause controversy among conservatives but is certainly a milestone in the acceptance of gay rights. Gay bashing is not a new issue in schools; in fact, Solomon first presented this piece in Chicago in 2001 as a protest to the manner in which the educational system has been dealing with young gay students. They deserve to be treated as human beings and accepted for who they are. And who knows for sure whether great icons like Santa, a pegan outcast in Christian philosophy, wasn’t homosexual as well?

Solomon ingeniously plays over a dozen characters in documentary style as he presents Gary Grey, a little boy, who asks Santa for a Brenda Ann doll, only to receive a truck instead. His irate father and bewildered mother refuse to give in to his choices, but when he does finally get a Dream Date Norm doll for his consistent efforts at being a good little boy, dark suspicions are cast on Santa Claus and school psychologist Mary Ellen Banfield of FAGA (Families Against the Gay Agenda) begins a superficial investigation which destroys the image of the myth. There is an uproarious puppet sequence here of Banfield’s wickedly dishonest enactment of what supposedly happened when Santa enticed Gary onto his lap with a candy cane.

This is a story about Gary, but it is also a story about Santa. That is the beauty of this piece, that it manages to cleverly bring two divergent stories together to make its point and at the same time entertain. Santa’s history of sealing a deal with Coca Cola in 1929 provided him a job as spokesperson for the soft drink, a chance to uphold his image, and an economical one to save his workshop. Due to the eventual emergence of Santa’s homosexual reputation and living with a male lover – Giovanni Gepetto, the distant relative of Pinnochio, his agent Sid Green points out to him the urgency of having a wife, to keep his public image clean, so Green sets out to hire classical actress Cecilia Lawrence to play the role of Mrs. Claus. Solomon essays all of these roles and more.

Not unlike Lily Tomlin in Search For Signs of Intelligent Life in the Universe, the actor, dressed simply in black trousers and black tee-shirt, shifts characters within split seconds by changing vocal inflection, accent, facial expression and using a simple prop like a hat, wig or jacket. That’s it! A well-honed exercise in adept acting talent executed with style and flair! Solomon offers quite a brilliant display of expertise. Other hilariously outrageous characters include a gay activist Jose, calling Santa – Santa Closet, an adorable little black girl, friend to Gary, named Cheyanne, a recklessly gay-bashing evangelist Bobby Bucket, a caring elf – “You mean Mr. Claus is a prancer?” and even Rudolph who changes his red nose to lavendar in support of his master’s lifestyle.

There is tremendous creative humor in Santa Claus Is Coming Out but what emerges first and foremost, aside from the astounding acting portrayals by Solomon, is a tender glance at the deep-seated feelings of being gay – what it is like for an innocent little boy, and for one living legend who is devastated because he cannot maintain his image as a true lover of children. At one point someone guns down and kills a department store Santa when the news hits the streets. In the end Santa outs with a book about himself and Gepetto, and his truthful disclosure, to the horror of many, is cathartic, going a long way to help cleanse the souls of Gary Grey and other gay children. Gay bashing is pitiful and unfair, and Jeffrey Solomon makes us really care about the truth and standing up and fighting in its defense.

Don Grigware is an Ovation nominated actor and writer whose contributions to theatre through the years have included 6 years as theatre editor of NoHoLA, a contributor to LA Stage magazine and currently on his own website: www.grigwaretalkstheatre.com